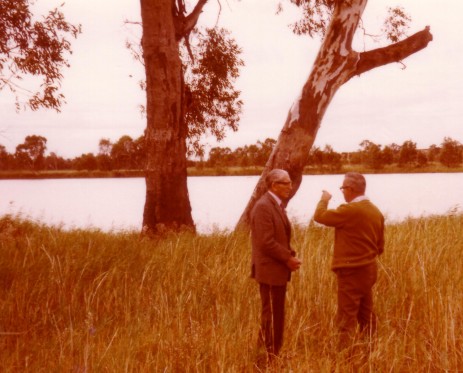 Jack and Louis Holmes at the lantern tree 1979

He used to hang a lantern in that tree —
the black-box standing by the old punt ramp.
He ’d camp, they told me, near the lignum reeds
rug-huddled while his wind-dimmed signal lamp
swung shadows on the night and hailed the “Gem”
to take him down to growers’ meetings. Then
his life comprised orations wedged between
short spurts of work that cluttered up his day.
And yet for years his noisy shadow seemed
to fall across their memories, haunting scenes
their rambling epics borrowed on the way.

And those scenes slowly fade as years run on
as silently as this glazed stream that glides
its grey way home. The authors of that long
apochrypha have gone away, or died
and gathering their yarns has been delayed
until the best have scattered leaving frayed
and faded strings of stories with me now. 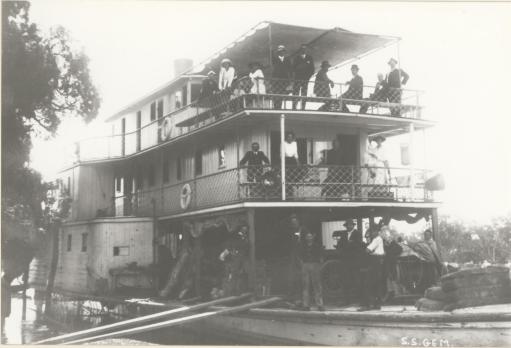 What sparked his feuding with the “Ellen ’s” crew
when he rowed soaking drunk from Cobby? How
was Roaney’s kicking cured? Who won the row
about the rancid hams? I wish I knew.
Because I find that here my daughter shows
a vocal interest in our family tree.
And in her wearing search for forebears grows
a little like the wordy man she sees
as irritating now as he was when
he roared along his life. I’ve told again
the little I’ve retained, but in my hands
the colour, dust and bluster have been thinned
and watered into tag-end tales that stand
as poor bequests beside that box tree and
its legend of a lantern on a limb.

Thanks to the Loxton Historic Village for permission to use the photo “Paddle Steamer S.S.Gem”, Loxton Collection [Scan10280], date unknown